Bringing aspects of games into the classroom can be highly motivational and engaging, making content stick. Here are some resources. (Public domain image via Pixabay.com)

Our society thrives on games. They’re everywhere, from our social lives to our work lives to our school lives.

People kill time on the bus, in a doctor’s waiting room and even in the bathroom (eww … but true!) playing games on their smartphones and tablets.

The sports world is a force to be reckoned with, and it’s all focused on games. Billions of dollars are exchanged in various professional, semi-pro and amateur sports, from salaries to equipment to apparel.

As people, we’re fascinated with games. And so are our students.

Bringing games and game aspects into class can help focus and motivate hard-to-reach students. They can provide a structure and “playing field” that students need to wrap their brains around certain tasks and concepts.

Game-based learning takes many forms, from a simple 10-minute review game to a complex system of XP (experience points) that lasts all school year — or beyond!

The conversation spanned the broad ideas around integrating educational gaming to the specific tools you can use to create it.

You’ll find 20 entries in today’s blog post below about gamification, but you’ll see that there are far more than 20 resources. With the lists and webpages of resources, there are dozens and dozens of ideas … and certainly at least a handful that are relevant to you right now!

Check out the Storify archive of the chat to see the whole discussion. Also, check out Michael’s website, explorelikeapirate.com, for more resources and ideas!

Before we jump into the list, the resource below is probably the most rich of them all! Moderator Karly Moura created a Padlet wall where we could share resources. Check out all the treasure! (Had to do the pirate reference for “Explore Like a PIRATE”!)

1. Power-ups and control over character sound a lot better than red pens and disciplinary referrals.

I love how games allow you to build, create and most importantly grow. #Ditchbook pic.twitter.com/zeyFpE1N3e

2. This infographic digs into some of the terms, research and history that have affected game-based learning.

3. These aspects of gaming in the classroom can boost engagement!

Games give us …
competition
structure (rules)
unpredictability
laughter
strategy
Sounds like a great class to me! #DitchBook

4. A leaderboard is one way to show students where they stand and encourage them to reach the next level.

A1: leaderboards! Just added this to an activity this week & I couldn’t believe the motivation Ss got from that #Ditchbook — Sean Fahey (@SEANJFAHEY) February 5, 2016

5. It’s easy to get stuck in a rut, doing the same old thing in class. Games are different every time you play them.

#gamification has so much to offer school. Teachers need to see this as a fun change and check it out! #Ditchbook pic.twitter.com/0McASITQ4L

6. Redo’s are a normal part of real life, and they’re a natural, logical way to learn without stigmatizing failure.

#DITCHBook a1: infinite chances and replays. Create an environment of success- either immediate or eventual. — Gollihar’s Class (@golliharsclass) February 5, 2016

7. Among the facts in this post: 75 percent of people consider themselves gamers!

8. Rewards, even if simple and extrinsic, can really motivate!

9. Brad lays out the details of his Call of Duty/Halo/World of Warcraft-style XP points system in his class. (It includes professional wrestling-style belts, too!)

A2: Never encounted #ditchbook b4. Can I jump in? Gamification is something I believe in. Check out my “XP” Systemhttps://t.co/40hWw07QQV

10. Authentic team work. Achieving this in basic “do this activity in groups” assignments is tough.

@golliharsclass Agreed. Competition also leads to authentic team work! Why don’t we ever talk about that side. #Ditchbook — Michael Matera (@mrmatera) February 5, 2016

A3) Many utilize @classcraftgame to help to gamify their room. Here’s review on @Graphite https://t.co/JI0nDKHIH4#Ditchbook

12. When we can catch students in the “moment of learning” with feedback, I’ve found they’re more likely to internalize that feedback!

A2 As a fan of trivia, I love the instant gratification I get from right answers, and I remember Qs that I got wrong, too! #Ditchbook — Erin M. Farrell (@erniem04) February 5, 2016

So many tools, but my fav are the ones build by a teacher for teachers https://t.co/obvCkuv80b #DitchBook pic.twitter.com/0unlD1jjry

14. Alice Keeler (@alicekeeler) presented on gamification at the BETT Conference in London. These are her slides and resources!

15. Turn a coordinate plane math lesson into a Battleship game!

A3: Coordinate plane Battleship on Google Slides (via @alicekeeler)https://t.co/ygS1p7C4JY #DitchBook

16. This template can turn your class OR professional development into a game with badges.

A3: Another tool is just to make a movie… Check out this years intro video to class game. https://t.co/xlmtFZeq6m Ss blown away. #Ditchbook

19. “Educator Al” shares a TON of links to gamification resources, including 13 days of World of Warcraft in science class!

20. Not everyone believes in gamification. Here’s a look at the debate.

[reminder]How do you feel about game-based learning? How have you used it in class? Which of these ideas could you start using?[/reminder] 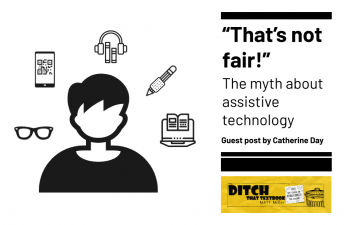 “That’s Not Fair!” The Myth About Assistive Technology