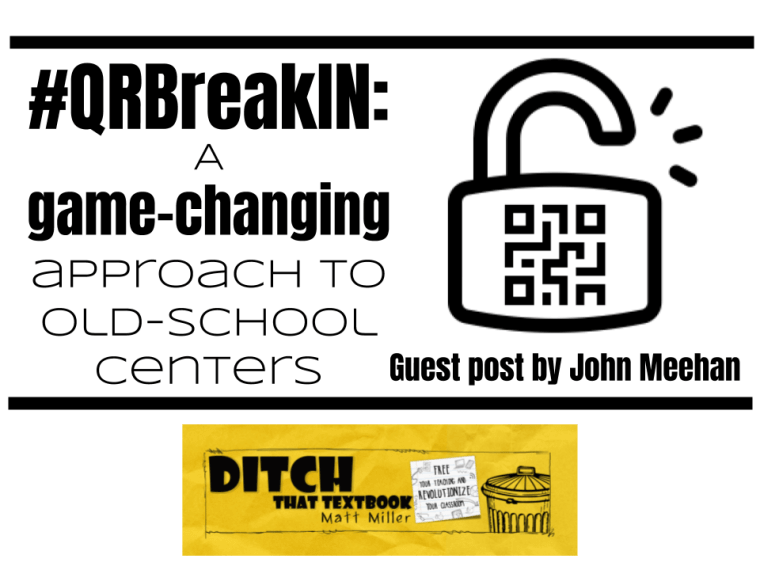 When we leverage the engagement that comes with game-based activities, powerful learning can occur. Add the fun and excitement of escape room style puzzles and code breaking to center activities and you have #QRBreakIN!

This post is written by John Meehan, an instructional coach at Bishop O’Connell High School in Arlington, Virginia. You can find John on Twitter @MeehanEDU or on his website.

My 11th-grade English students loved escape room activities in class. But I was bugged by the fact that not every student ended up having access to every puzzle each time we ran these scenarios. Some students might breeze through two or three activities in the same time it took a group of their classmates to crack the code for just one.

Likewise, there’s an inevitable logjam at the very end of most escape room games as some 20+ students crowd around a table that’s only so big to watch only a handful of their peers try to bust open that final lock.

At the outset, I envisioned #QRBreakIN as a sort of “reverse escape room” (think small group relay race through old-school centers). All of the adrenaline, none of the time on the bench.

Likewise, I wanted to use the game to correct some issues I’d typically experienced when running a traditional stations activity (specifically, the age-old “3-2-1, rotate!” approach, when it’s immediately clear that some groups might have been done for ages, while others are nowhere near ready to move on).

Suddenly, Lorraine Hansberry’s A Raisin in the Sun became a living game of Monopoly, where students rolled giant foam dice to move around the city of Chicago to help the Younger family move into their Boardwalk-style dream home in Clybourne Park.

Along the way, student teams spent the better part of two full hours solving color-coded “property” puzzles as they landed on various locales, earning “houses” as they worked together to learn about race riots, redlining, and key passages from the source text.

And William Faulkner’s As I Lay Dying transformed into a fetch quest for missing tools in a runaway river, inspired by the old Nintendo video game “The Legend of Zelda.”

F. Scott Fitzgerald’s The Great Gatsby took a gamified riff on the board game “Clue,” and students explored various rooms in Gatsby’s mansion while collecting background information through a series of puzzles related to prohibition, flappers, and the Lost Generation.

Now everybody plays. Everything. And the only way through it is to do it.

Some tips for  a successful #QRBreakIN:

Teams of students race to complete a series of asynchronous activities, grabbing one puzzle from the overhead “hub” at a time and solving it back at their desk group with a team of 4-5 classmates. Using gameplay mechanics and visual themes borrowed from familiar childhood board games, what was once eight different lectures became eight activity centers, and student teams now spend entire classes working asynchronously in a looping three-step process:

Mix up digital and traditional.

#QRBreakIN blends new school tech like Quizizz, Google Forms, EdPuzzle, and Flipgrid with hands-on deliverables like Sketchnotes, graphic organizers, or timed small group conversations. Each activity center has its own unique submission requirement (like the Quizziz center: “have two members of your team score a 100% on this quiz before you’re allowed to call the teacher over!”).

And for kicks, I even threw in an NHL style “penalty box” mechanic where a team could be trapped for two minutes without any chance of further teacher work product spot check if they called me over to check out their submission before it was actually ready for proper review. So now I’ve got students teaching one another, and peer reviewing before they submit.

​The best part is: the small group approach is designed for instant feedback, which means that students are learning from their mistakes and course correcting right there in real time. Six out of the eight centers can be graded on the spot (The Google Form station collects writing samples of at least (x) characters in length for later review thanks to the Response Validation feature, and the Flipgrid station collects videos of 2:30 – 3 minutes in length which we can likewise review after class). AND I’ve quadrupled the amount of one-on-one face time I can get with individual students thanks to this modular small group approach.

As teams complete their eighth activity center, I’ll usually offer a “BONUS ROOM” puzzle (enrichment activity) designed to help them kill time while their classmates wrap up the game. Building your favorite scene from Ethan Frome out of LEGO bricks and posting photos to your class Twitter account annotating all the little details that you’ve decided to include? Feels like a game, but there is so much learning happening!

Adapt for those that don’t finish in time.

Any teams who don’t get to make it through all eight regularly scheduled centers can still complete any outstanding work products for homework before our next class — which is almost always a Socratic Seminar where students come loaded with things to share about what they’ve learned about the assigned text.

Interested in creating your own “Clue” inspired #QRBreakIN game? Get started with this template and checklist to adapt for your grade level and content area!

Learning math through story: Examples from one teacher’s classroom

10 game hooks to inspire learning in your class