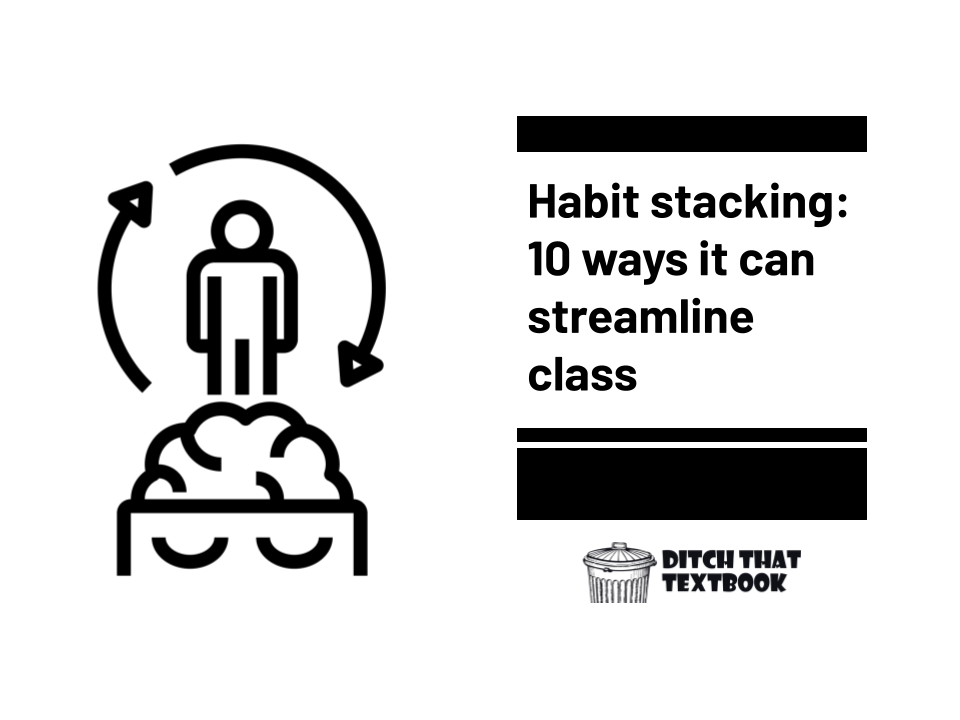 Habit stacking can create cues to help students remember to do what they need to do. Here are 10 ways it can work.

Do you ever feel like you tell students to do the same things every single day?

Turn in your assignment. Push in your chair. Do your exit ticket. Pick up your materials.

If we could only make some of those activities habits ... then we wouldn't have to remind them every single day ...

This is where habit stacking helps a LOT.

Habits can be negative .. even destructive. Biting your nails. Staying up too late. Procrastinating. The list goes on.

But habits don't have to be bad. They're your brain's way of making decisions without working too hard. If you can line them up with your goals, they can be powerful.

"A habit is a behavior that has been repeated enough times to become automatic," writes James Clear in his bestselling book Atomic Habits. "Whenever you face a problem repeatedly, your brain begins to automate the process of solving it. Your habits are just a series of automatic solutions that solve problems and stresses you face regularly.

What is habit stacking?

It's one of the easier ways to create new habits. If you're tired of telling your students over and over and over again to do something, you might be able to stack it together with something they already do. That's habit stacking.

Want to add healthy options to your lunch? As soon as you get your lunch box out (current habit), add a fruit or vegetable to it before anything else (new habit).

Want to keep your car clean? As soon as you turn off the car (current habit), pick up a few pieces of trash or excess items (new habit).

It's all about taking something you already do and adding a new habit to it. Once you've done it for a while, the current habit will become a cue to do the new habit. Then, it'll feel natural -- automatic, even.

10 ways to use habit stacking in the classroom 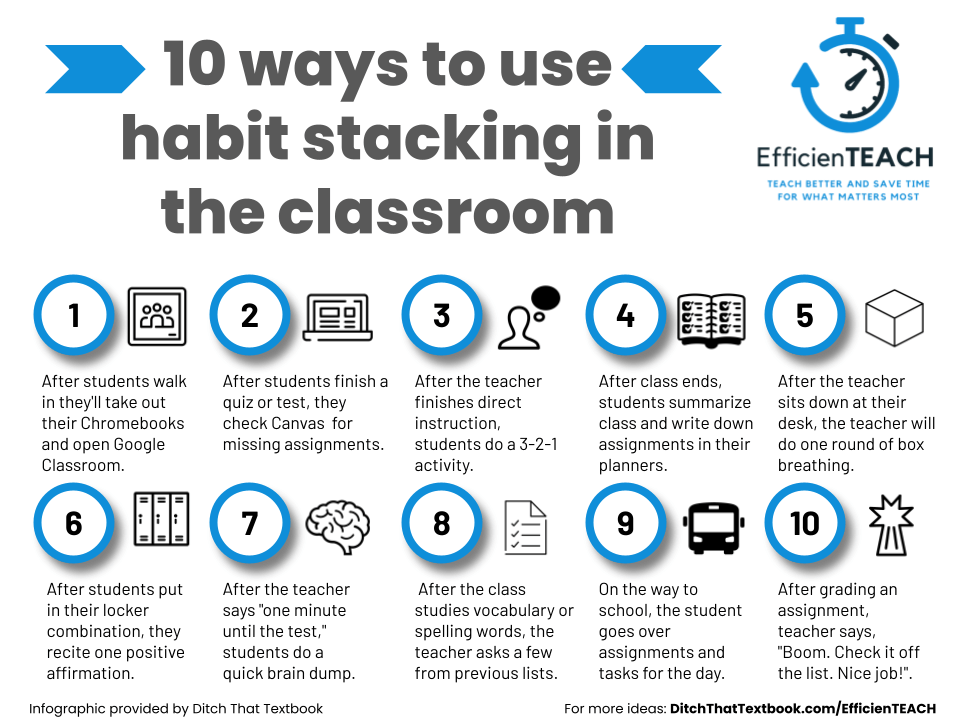 Can habit stacking work in the classroom? Absolutely. It just takes two simple steps (and then lots of execution):

Here are some examples:

1. After students walk in the classroom, they'll take out their Chromebooks and open Google Classroom.

Current habit: Walking in the classroom

This one was powerful in my own classroom. I didn't have to remind my students to get their Chromebooks out because it was just what we all did every day as soon as we got to class. The "as soon as you enter the class" habit may be one of the easiest on which to stack new habits.

2. After students finish a quiz or test, they check Canvas for missing assignments.

This isn't a daily habit, but when students finish a test or quiz, they usually think, "OK, what do I do now?" If there's a predetermined task they should do afterward, it'll keep them on top of that new habit. In this case, they'll be more likely to finish those missing assignments.

3. After the teacher finishes direct instruction, students do a 3-2-1 activity.

Right after the teacher teaches -- or after a class discussion -- students' brains are still holding all that new information in their working memory. If they can sort through it, they can save some of it in a 3-2-1 activity or help lock it in long term memory by processing it. A 3-2-1 activity (or, at least, one of many variations of it): 3 new facts, 2 things I find interesting, 1 question for next time.

4. After class ends, students summarize class and write down assignments in their planners.

The current habit in this one -- ending class -- is one of two habits that are unavoidable every single day. (The other, of course, is beginning class.) These are some of the easiest and best places to stack new habits. If you don't already have habits stacked on the beginning and end of class, these are great places to start.

5. After the teacher sits down at their desk, the teacher will do one round of box breathing.

Current habit: Sitting down at the teacher's desk

New habit: Do one round of box breathing

6. After students put in their locker combination, they recite one positive affirmation.

As often as many students go to their lockers (sometimes after every class period), this habit can be a powerful one for stacking. Teachers aren't the only ones who need mental health habits, are we? If we encourage students to use that habit for something positive -- like positive student affirmations -- it might transform their day one little moment at a time.

7. After the teacher says "one minute until the test," students do a quick brain dump.

Current habit: Saying there's one minute until the test

You can stack habits at the end of a quiz or a test. But you can also stack them before -- especially if you, the teacher, give the students a cue beforehand. Doing free recall, where you pull everything you remember about a topic from your memory, is a powerful study technique for long-term memory. It can also be a good way for students to prepare their brains for a quiz or a test.

8. After the class studies vocabulary or spelling words, the teacher asks a few from previous lists.

This is a cooperative teacher/student habit. Is practicing vocabulary or spelling words (or any sort of repetitions to make permanent) a normal part of your class? If so, it's a great place to stack a new habit! Spaced practice is a best practice backed up by cognitive science. Spacing out learning over time helps build long-term memory and keep content fresh.

9. After the student boards transportation to go to school, the student goes over assignments and tasks for the day.

New habit: Go over assignments and tasks for the day

Of course, as teachers, it's hard for us to control our students' habits when they're not even at school yet. But if the idea of habit stacking starts to click in your classroom, you might encourage students to try it when they're outside of school.

10. After the teacher finishes grading an assignment, the teacher says, "Boom. Check it off the list. Nice job!".

If that little saying isn't in your vernacular, feel free to change it all around. Here's why this one might help. In Atomic Habits, James Clear spells out the anatomy of a habit: cue, craving, response, reward. Something makes you act. It makes you want to do something. You respond. Then, there's some sort of reward that encourages the habit to happen again. If there isn't a clear-cut reward in your habit, maybe something as small as a little verbal encouragement can help. This, of course, can be motivating for students as well as us!

What current habits can you stack new ones on? What new habits do you want to introduce into the classroom? How have you seen habits to be powerful in your own class? Leave a comment below!