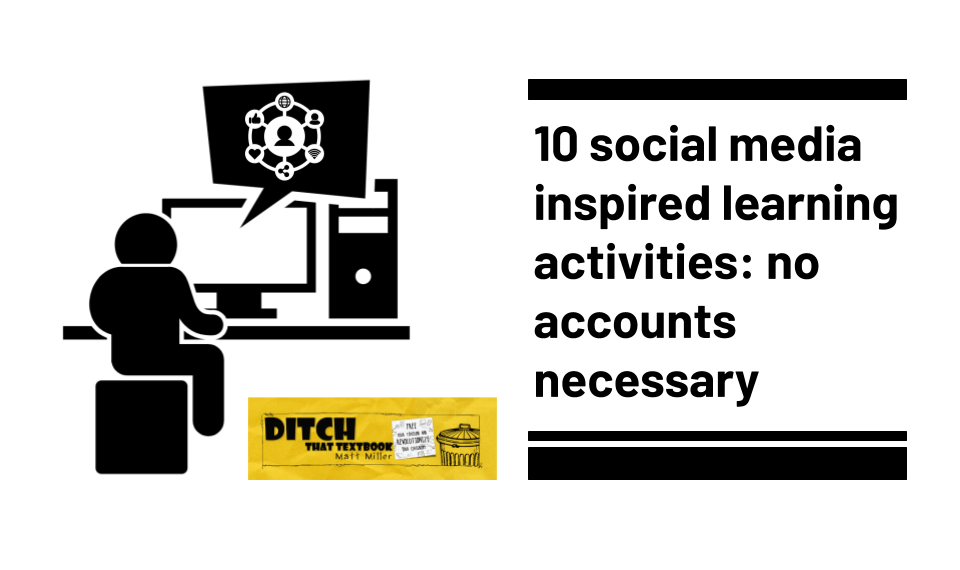 Social media grabs many students' attention. You can capture some of that excitement without using the social media apps in these templates and sites!

If your students aren't using social media yet, they probably know all about it!

Certain aspects of social media could make for great learning activities and assessments. But there's all of that other junk -- like terms of service, the fleeting nature of some posts, not wanting to post educational stuff to a personal account, etc.

Well ... you don't need the app to create the experience!

In this post, you'll find 10 ways to bring social media excitement into your learning activities.

I learned this first-hand in my own classroom when the Vine app craze it.

The following is an excerpt from my new book, Tech Like A Pirate, which will be released in spring 2020. Tech Like A PIRATE encourages teachers to provide those experiences by tapping into technology that grabs students’ attention immediately and redefines learning. Keep updated on the release of Tech Like a Pirate by subscribing to Ditch That Textbook email newsletter.

One day in my Spanish classes, I asked my students if they knew about Vines. Some of them looked offended that I’d even question that. “Uh, yeah. They’re amazing,” they told me. “So,” I asked, “what if we made Vines as part of class?”

Instantly I had their rapt attention. Making Vines in class? Their minds raced for a moment. I could read it all over their faces. “This doesn’t make sense,” they were surely thinking. “Teachers hate social media. They’re always telling us to put our phones away. Is Mr. Miller really going to let us use them?”

The answer? Well, yes and no.

Yes, we were going to make six-second videos.

Yes, they were going to use mobile devices to shoot them.

Yes, they were going to resemble Vines. (Kind of.)

No, they weren’t going to use the Vine app.

At first, I wanted to get the app in students’ hands. But I realized that idea was fraught with disaster. The app was rated 17+ on Apple’s App Store, putting it out of reach of most of my students. There was explicit content in some Vine videos. Plus, the thought of all of those usernames and passwords and accounts to keep up with started to give me a headache.
Then, it dawned on me. It wasn’t the app that I wanted. It was the experience. I wanted students to have the experience of using Vine without actually getting their fingers soiled by the Vine app itself. ​

So we started shooting vocabulary Vines. Students planned how they would spend their precious six seconds. They wanted to get as much comedy, as much fun, as much “wow” as possible to impress their friends. And, of course, they had to include the vocabulary word in the video.

The lesson created a lot of buzz! Students loved creating them. It was the proof of concept that I was hoping for. The problem was that our six classroom iPads just weren't up to the task yet. They didn’t make creating, sharing and viewing the videos as easy as I’d hoped. Plus, I hadn’t found the perfect app for creating looping videos without Vine yet. I guess you could say that the idea was a bit ahead of its time.

The lesson was a bit of a bust. But the seed was planted deep inside my teacher soul.

You don’t need the app to create the experience.

Think about what hooks students on their favorite apps …

So how do we create the experience without the app?

Here are 10 ideas including templates and resources for using various social media platforms in any class. Note that you can certainly use almost all of these ideas with the actual app itself if you have older students or a class account. 1.  Play Snapchat games like "My Face When" in Google Slides to personify words or ideas.

Students LOVE Snapchat games! You can tie them into your class WITHOUT needing the Snapchat app. Just use Google Slides! Click here to read more and get free downloadable templates. 2. Use simitator.com (teachers only) or Google Slides to create a fake Facebook status of a book character. Students need to be 13+ and have a valid email address in order to use Facebook. So for those that teach younger students or want to use Facebook without going on the site, this Google Slides template created by Ryan O'Donnell is the perfect solution. 3. Use ClassTools to create a fake Facebook profile for a historical figure. To create a realistic profile for a historical figure or a character in a book, students will have to do a lot of critical thinking. And they will definitely have fun while they do! This web tool will help them start creating. 4. Express a thought or summarize an image by annotating in Google Drawings with a hashtag. Adding relevant text to an image requires a deeper level of understanding of the content. Add a bit of fun by having students add in a hashtag that summarizes the image or expresses a thought. Check out the examples in this Colonial Times HyperDoc. Let’s use an app that millions of students already have access to — Google Slides — to recreate the TikTok experience instead of using the app. Students can use this Google Slides template to create a PSA about something they are passionate about to share with their peers. 6. Create Instagram Stories using Google Slides where students demonstrate a skill and teach others through video. Instagram Stories is a pretty popular feature, and it’s a great storytelling tool. Users can capture important moments of their lives in photo or video and string them together for others to watch one by one. Have students create their own Instagram story demonstrating a skill to teach others through video. 7. Use Google Slides or Google Drawings to create a Twitter post summarizing a concept or text in 280 characters or less. What would happen if a character in a story you’re reading tweeted about an event in the story? Or about an event in current events … or in another story? You can let students create those tweets with Google Slides! 8. Brainstorm dialogue between characters in creative writing with ifaketextmessage.com.

Kids love to text and some can do it all day. Why not use the experience of texting to brainstorm dialogue for a story can be difficult. ifaketextmessage.com allows users to create a very realistic text message exchange. 9. Use ClassTools to create a news story to teach the concept of fake news and credibility. Fake news is very real. Teaching students how to identify it and research credible sources is important. Have students create their own fake news headline as part of your digital citizenship unit. 10. Create a Pinterest style board with Google Slides or Powerpoint to showcase artwork or projects. Pinterest is a great way to get quick ideas or inspiration for a project. But it is also a wonderful way to share your own creations. Students can use the layout and appeal of a Pinterest board to showcase their artwork or images from projects with this template created by Cynthia Nixon.

LOOKING FOR MORE PRACTICAL IDEAS LIKE THESE? GET 3 FREE EBOOKS FULL OF RESOURCES!