12 ways to use Google Cardboard in your class

12 ways to use Google Cardboard in your class 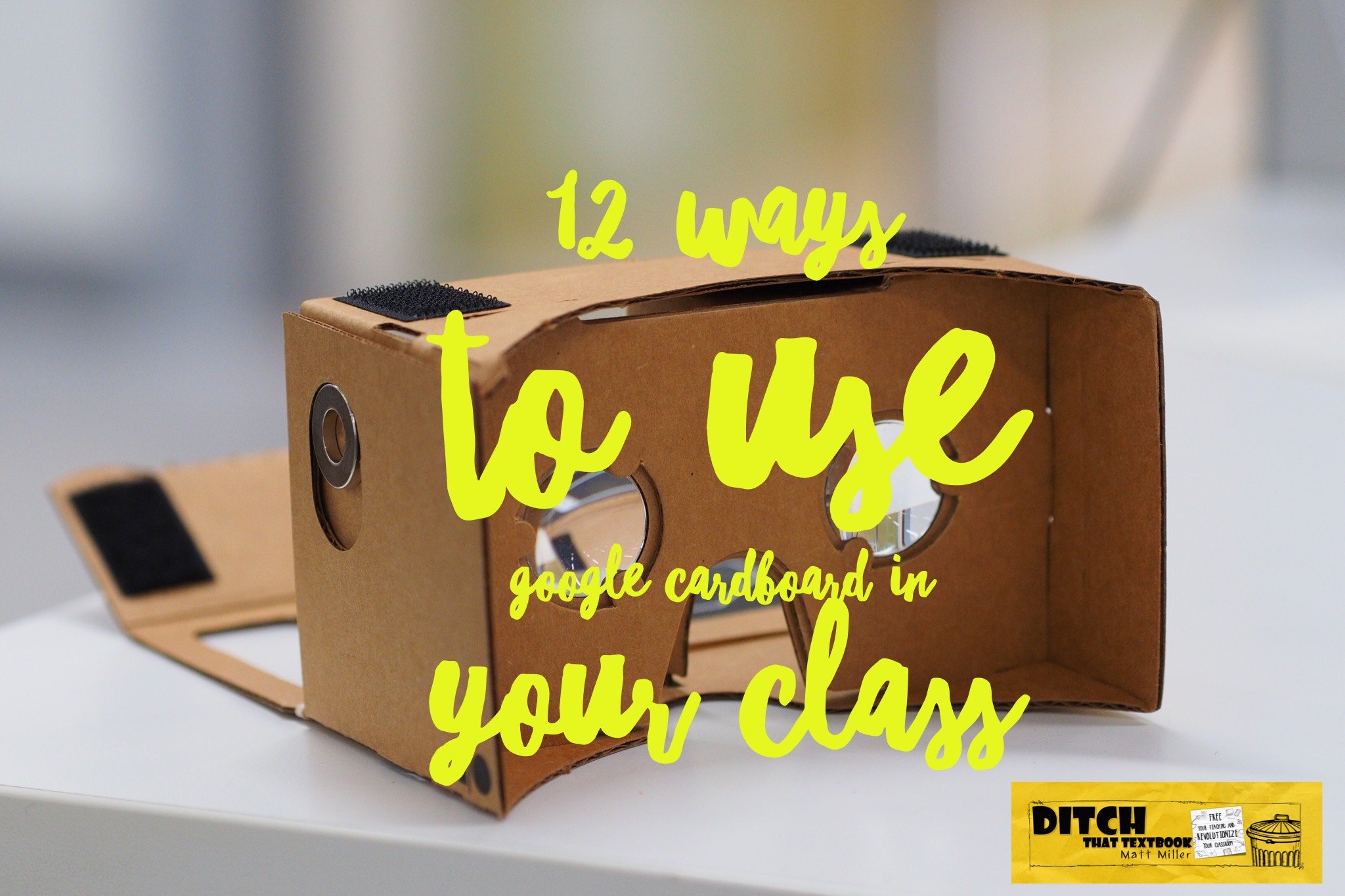 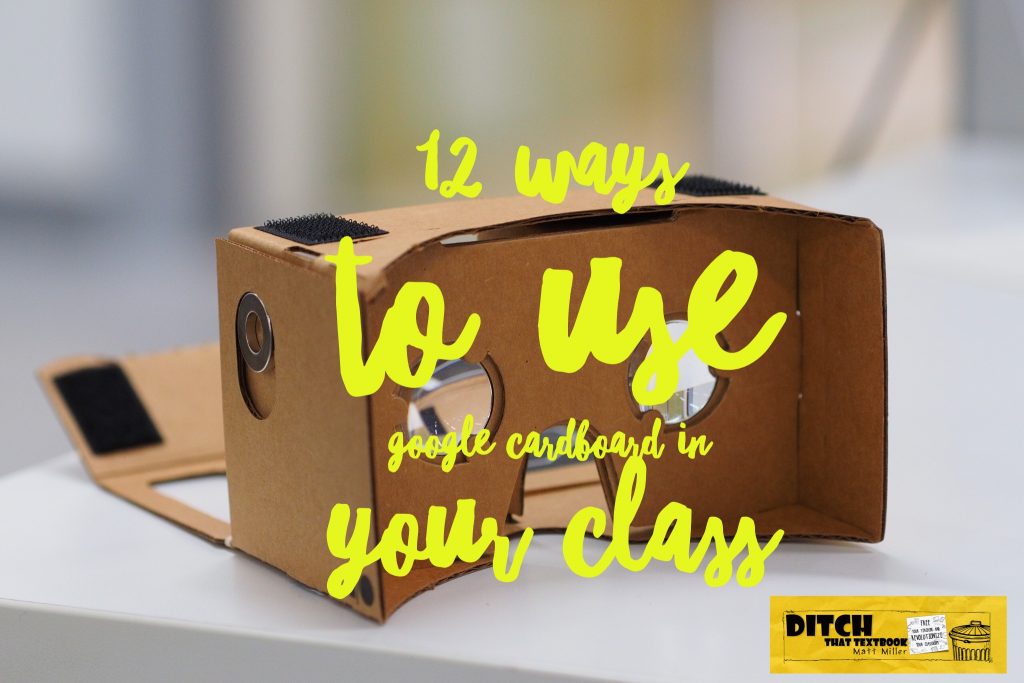 Google Cardboard delivers vivid real and imaginary experiences in full 3D. See how you can get AND implement Google Cardboard in your classroom. (Wikipedia / othree / CC BY 2.0)

Virtual reality used to be the thing of science fiction books and movies. Now, it’s inexpensive, works with the technology we carry in our pockets, and can transform us to real and imaginary places.

I remember watching Marty McFly sit at his table in “Back to the Future Part 2”, watching TV with virtual reality goggles. Among many future predictions in that movie, I thought, “How cool would that be?”

It’s here. And we can use it to bring spectacular experiences to our students.

Although many companies are diving into the virtual reality market, Google Cardboard seems to be the one that is the most cost-effective and realistic for classrooms right now.

With a little research, a little money, and a little creativity, this technology can have an impact in lots of classrooms — likely including your own.

What you need for Google Cardboard 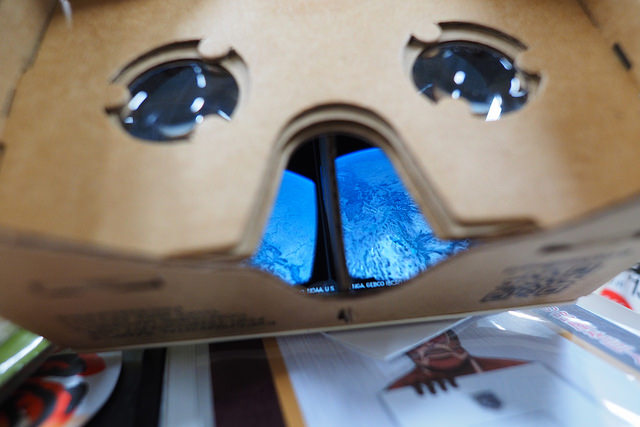 Google Cardboard apps split your screen so you can see images through the lenses for each eye. (Flickr / othree / CC BY 2.0)

Google Cardboard itself is a virtual reality viewer often built from (you guessed it) cardboard but also from plastic and other materials. There are lots of fun Google Cardboard viewers available, including:

Looking for ideas on getting Google Cardboard in your classroom inexpensively? We’ll get to that momentarily.

How to use it in the classroom 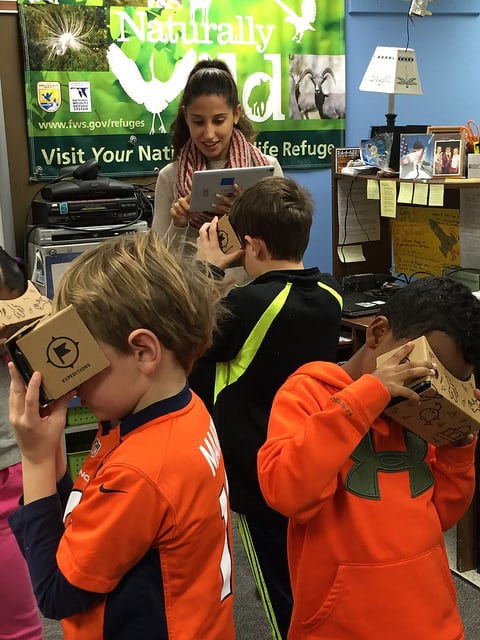 Whether you have one Google Cardboard (viewer + smartphone) to pass around or a set for the whole classroom, it’s the apps that students will interact with.

There are dozens of apps out there that will interface with your Google Cardboard. When they’re activated, they’ll split the screen in half (one side for each eye) for use with the viewer.

With some researching of available apps and some ingenuity, there are lots of options for integrating Google Classroom in the classroom. Here are some ideas:

1. Go on a virtual field trip — Google released the Expeditions app (Google Play) to the world in summer 2016. This app lets teachers direct a virtual field trip to lots of places all over the world. The teacher chooses a view and the students can watch it through their Google Cardboard viewers.

2. Walk the streets — A less teacher-directed approach is to use Google’s Street View app (App Store / Google Play). This app uses the 3D panoramic images taken from the street all over the world. Students can visit these places virtually and walk the streets, looking all around.

3. Watch 360-degree videos — YouTube has a large selection of 360-degree videos. Take students skydiving, underwater in search of sharks, and on a tour of a particle collider in full 3D! If you have the YouTube app (App Store / Google Play), you already have access to its Google Cardboard features. Search for videos and then use the 360 filter in your search.

4. Go on adventures with Discovery — The makers of the Discovery Channel have a huge collection of educational virtual reality experiences. I took a trip inside an energy-efficient car with theoretical physicist Michio Kaku with the app. (App Store / Google Play)

5. Take your own 3D images — Use Cardboard Camera (Google Play)to let students take VR pictures of their world — or the places they visit. You can record audio with these images, too. I can imagine great combinations of a 3D photo and a voice narration of what you’re seeing.

6. Learn about designing virtual reality — The Cardboard Design Lab (Google Play) app teaches you some of the fundamentals of creating an inviting, intriguing VR experience. It shares do’s and don’t’s for aspiring programmers — or those that are just curious.

7. Bring physics alive — Lots of roller coaster apps are available for Google Cardboard (like VR Roller Coaster for Google Play). They can vividly illustrate the concepts of potential and kinetic energy as well as the forces involved in roller coasters.

9. Prepare for a job interview — In the Public Speaking for Cardboard app (Google Play), you’re dropped in a board room in a job interviewer. The app asks you common interview questions, and you can practice answering them in a 3D job interview environment.

10. Tour Abbey Road — Google has created Inside Abbey Road (Google Play), which takes you behind the scenes at this world-famous recording studio. Watch as a symphony orchestra performs and as the staff prepare for and execute recordings. It has wonderful connections to music, technology and history.

11. Check out 3D exhibits — Sketchfab (App Store / Google Play) lets users create 3D renderings of lots of things and upload them to their gallery. The range of exhibits is broad, from a beating heart to a sculpture of Napoleon.

12. Continue the story — Google Cardboard is a perfect medium for creating role-playing games where users put themselves in the middle of a story in 3D. Browse the App Store or Play Store for Cardboard apps and you’re bound to find some. If you’re looking for stories to analyze or writing prompts, this could be an interesting source.

Getting Google Cardboard in your class or school 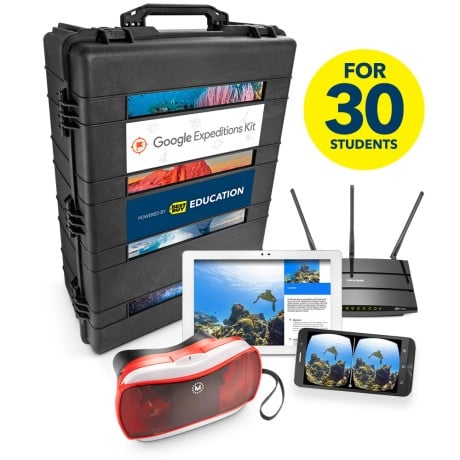 You don’t need to buy these $10,000 kits to get Google Cardboard in your classroom. (Image via BestBuy)

Google has started promoting Google Expeditions kits from BestBuy. They include new smart devices for students, Google Cardboard viewers, chargers and more. The price for a set of 30: almost $10,000!

Do you need to spend that kind of money to get virtual reality in your classroom? No way.

Need a charging station? People have created very innovative options that don’t cost much. Check out some ideas!

[reminder]How have you used/could you use Google Cardboard in your classroom? Do you have any apps to suggest? [/reminder]