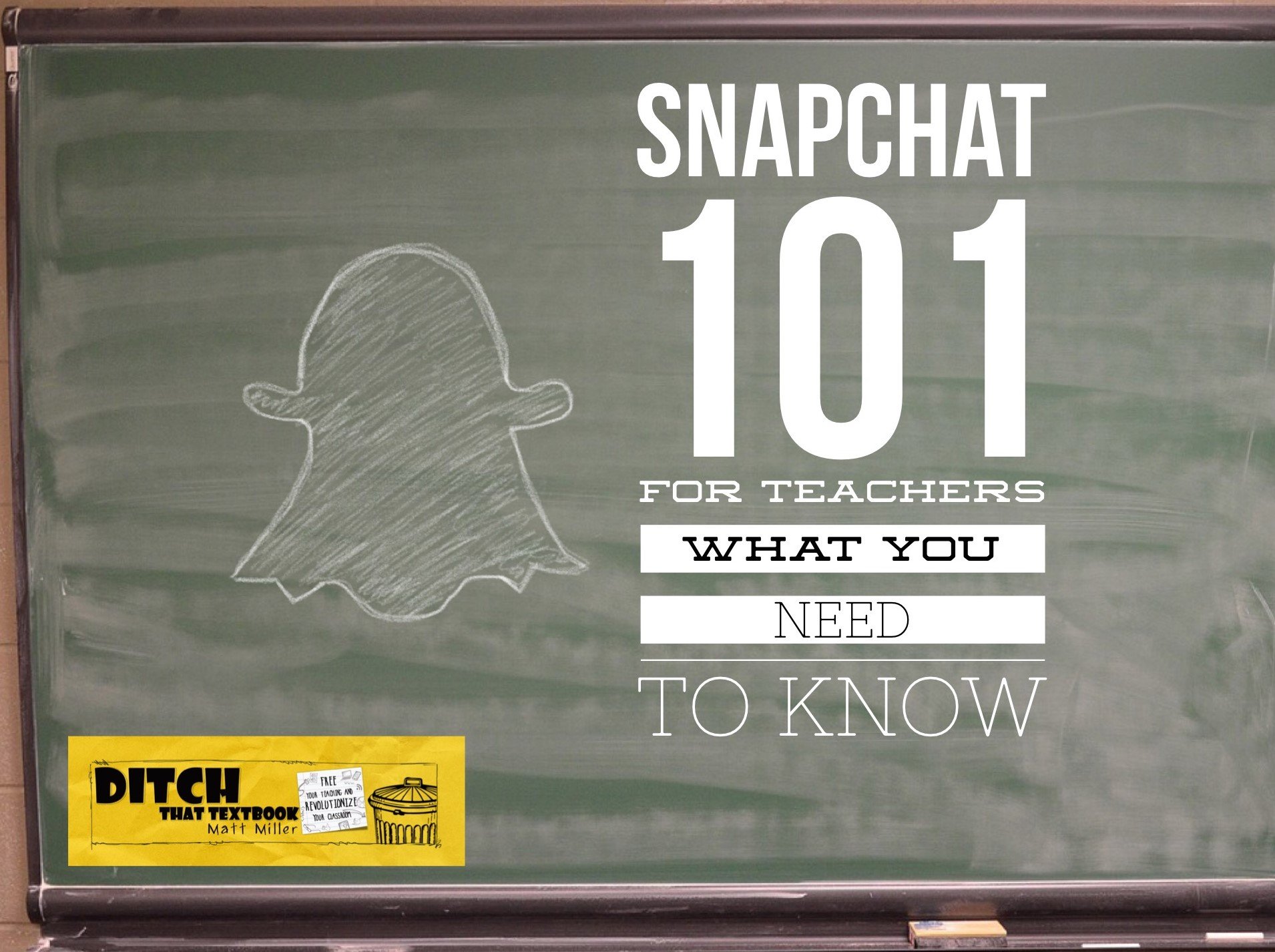 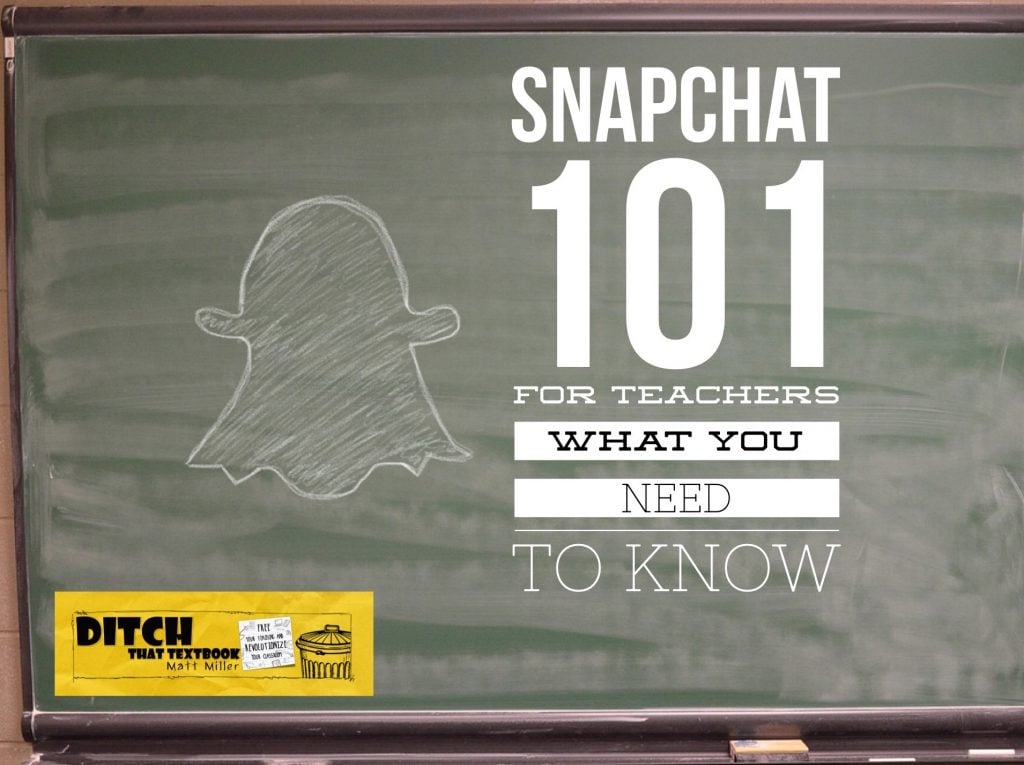 People all over have formed lots opinions about Snapchat based on very little information. Here’s what you need to know to be informed. (Image by ElasticComputeFarm via Pixabay.com / CC0)

In my first conversation about Snapchat with another educator, I didn’t have a very open mind.

“Let’s Snapchat each other to talk about it more!” she said. I politely declined.

I didn’t want anything to do with it. Snapchat had gained a reputation as a place where kids go to swap inappropriate pictures.

Today, it still has that reputation with many in the education world.

Recently, I signed up for a Snapchat account to share fun stuff with family, and I’ve learned a lot about the features and how they work.

Before, I thought nothing productive — or safe — could come from using Snapchat in the education world.

No digital tool is inherently evil, and Snapchat is no exception. If someone wants to be naughty online, they’ll find a way.

Just because a student can abuse something doesn’t mean we should try to ban it from schools altogether.

We’ve seen people making copies of their rear ends (and worse) with photocopiers, but we haven’t banned those from schools.

It’s possible for students and educators to send inappropriate text messages (and, according to the news, they do). But reputable services like Remind (a free, safe platform for texting/messaging students and parents) connect more than a million teachers with millions of students and parents safely.

And, if you think about it, pencils are extremely dangerous with their sharp points. Their abuse could be fatal. They’re available in pretty much every K-12 classroom all over the world.

Remember — the education world balked at Facebook when it came out, too. There was just too much negative that they could open themselves up to. Now, schools and districts everywhere (including the tiny rural Indiana public school my kids attend) use Facebook to connect with families. Why? Because it’s safe and because that’s where everyone spends a lot of time.

Snapchat is an app-based social network. It lets users send pictures and videos to each other.

You can add extra elements to your pictures and videos:

When snaps (images/videos) are sent to others, you determine how long they can be viewed (up to 10 seconds). Once they’ve been viewed, they can be replayed once, but that’s it … they can’t be accessed again. (More on that later.)

You can gather your snaps (images/videos) in stories. Stories are a single place to gather multiple snaps … think of them as a photo album where you can collect what you share. Stories are viewable for 24 hours by people that follow you.

If you’d like more details on how the app works, there’s a nice, thorough post on its features here.

Snapchat can be used safely by teachers and schools. (More on that later, too.) And with 100 million daily users watching more than 7 billion videos per day, there’s a great chance that teenage students — and their family members — are there. 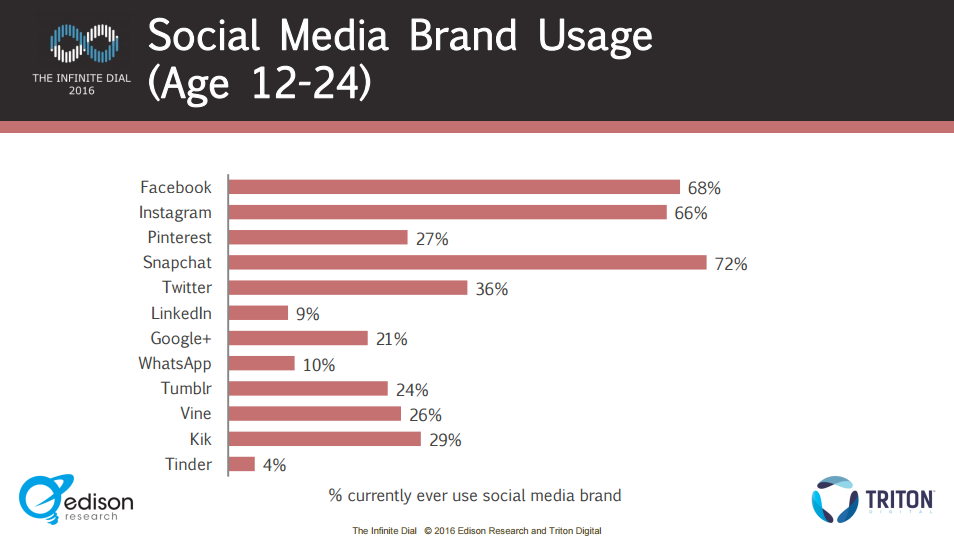 Stats via the “Infinite Dial” study by Edison Research and Tital Digital.

In fact, Snapchat surpassed Facebook, Instagram and others as the No. 1 social media app that users age 12-24 say they use (Edison Research … see page 60).

As I’ve learned about Snapchat, here are the facts I wish someone would have told me when I first learned about it. (Whether you intend to use it or not, these are good things to know if you interact with students who use it.)

Also, the Snapchat Terms of Service say that users must be at least 13 years old to have an account.

More on Snapchat in education

With all of that said, this brings up some questions:

How can teachers and schools utilize Snapchat for educational purposes or to improve relationships with students? Check out this post — 15 ways to use Snapchat in classes and schools.

And, above all, how could we do all of this safely?

I’m planning on exploring all of that in an upcoming post.

For now, I’d love to hear all of your thoughts, concerns and uses of Snapchat. I’d love for these posts to become home to a vibrant discussion on this very popular, very talked-about digital tool. I’m still learning about it, too.

For another educator’s take, A.J. Juliani wrote a great blog post on Snapchat, too, with some different points than I’ve made: The Complete Guide to Snapchat for Teachers and Parents.

Snapchat is the elephant in the room for lots of educators. Lots of opinions have been formed based on very little information. Through education and dialogue, we’ll know more and can make better-informed decisions.

Whether we do anything about it, Snapchat is a force in the world right now — and students will be using it whether we educate ourselves about it or not.