iPads were a force in education. But with Chromebooks that have keyboards, touchscreens and apps, that all may change. (Image of Acer R11 used by fair use.)

I have worked with all sorts of digital devices in my own classroom — desktop computers, laptops, Chromebooks, iPads, student cell phones and a variety of others.

Hands down, the best experience for me has been Chromebooks. I’ve outlined why I choose Chromebooks for a 1:1 initiative or, as I had, for carts that stay in the classroom. I’m a huge believer in the power of G Suite and Google apps in the hands of students.

Recently, I got to take an early test drive on the Acer Spin 11 Chromebook, which is due to be released soon (as of publication of this post). Here’s what I loved about it:

At one point, I was skeptical about the need for touchscreens on Chromebooks and laptops. Recently, something changed my mind.

Google announced that it would make Android mobile apps available on touchscreen Chromebooks.

This was HUGE news to me, at least from my background and perspective. I count myself a technology-using educator first, not an administrator or IT type. My experience is using technology in the classroom, not making the wires connect or the infrastructure work for a whole district. (If that’s your background, your thoughts on all of this would be very welcome and useful to everyone in the comments below.)

If Google can make this work — and if it’s true that Android apps will run seamlessly and easily on a touchscreen Chromebook — here’s what keeps occurring to me:

Several things make me think this:

1. They’re made for using G Suite. — The sharing and creation power of Google apps in G Suite have been enough to transform classrooms around the world. Chrome OS is made to run Google products on the web. If you’re invested heavily in Google in education (and I hope you are), these devices are made for you.

2. They take advantage of iPad’s biggest advantage: apps. — iPads have their advantages. For one, you can create images, video and audio really well with them. Their biggest strength, I’d argue, has been the apps.

The iOS App Store, for a long time, has had the best selection. But the Google Play Store is catching up. If you can use mobile apps on a Chromebook and Android mobile devices, more people will use them. The demand for Android apps will grow. And the gap between the App Store and the Google Play Store will dwindle.

3. Everyone seems to want a keyboard. — If we’re doing academic work, a keyboard seems to be a non-negotiable. I talked to a school district today that has switched from an iPad-heavy environment to Chromebooks. One of their discoveries: Students who were so used to texting and using social media with a touchscreen keyboard didn’t want to do school work with one. I personally am faster and more efficient with a real, physical keyboard. People are talking to their devices more and more with Google Assistant and Siri. Voice typing is available in several Google apps. But we’re not to a place yet where those are usurping a keyboard.

4. They offer a blend of typing and writing by hand. — The Acer Spin 11 I mentioned earlier has an amazing combination of stylus and touchscreen with Wacom electromagnetic resonance technology. Cognitive science touts the benefits of writing by hand over typing for improved memory. I love the powerful learning and memory that come from sketchnoting / visual notetaking. For a while, when people ask me how to do sketchnoting on the Chromebook, the best ideas I’ve used and heard of just couldn’t compare with sketching on an iPad or on paper. Now, with a stylus with electromagnetic resonance, things are looking up for this option. 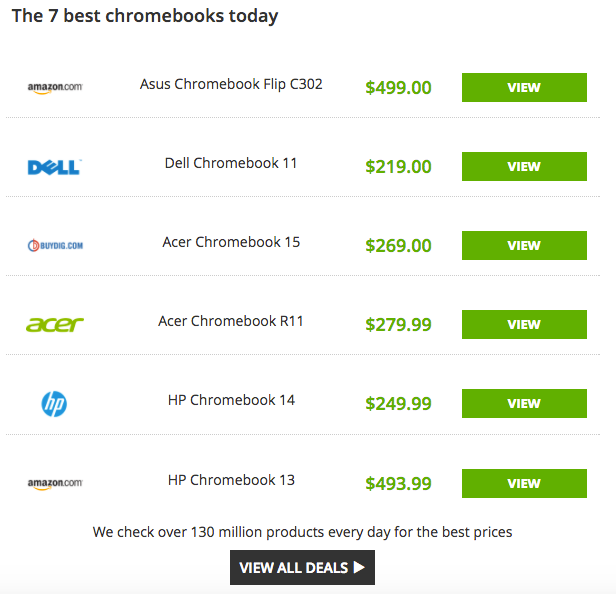 What I’m not in favor of is banning iPads from schools outright. I still think the best situations are where students have access to a variety of devices and can use whatever suits their learning best. A cart of iPads or having a handful of them for checkout is a great option still.

Again, remember who this is coming from — someone who has used Chromebooks in the classroom (among other devices) and who is totally bought in to G Suite.

We’re still not there yet. Not every Chromebook can run Android apps yet. (Here are the ones that can.) (And if yours can, here’s how to install Android apps on your Chromebook.)

If I had the decision-making power for a school district, I personally would do whatever I could to get touchscreen Chromebooks with Android apps in the hands of my students. As the integration of Android and Chrome OS improves and becomes widespread, I think there’s a good chance that this could be the deathblow to widespread iPad adoption in schools.

I’d love to hear your thoughts on this — and what your background is.

[reminder]How do you view the future of student digital devices in light of these touchscreen Chromebooks? What do you envision as the ideal going forward?[/reminder]