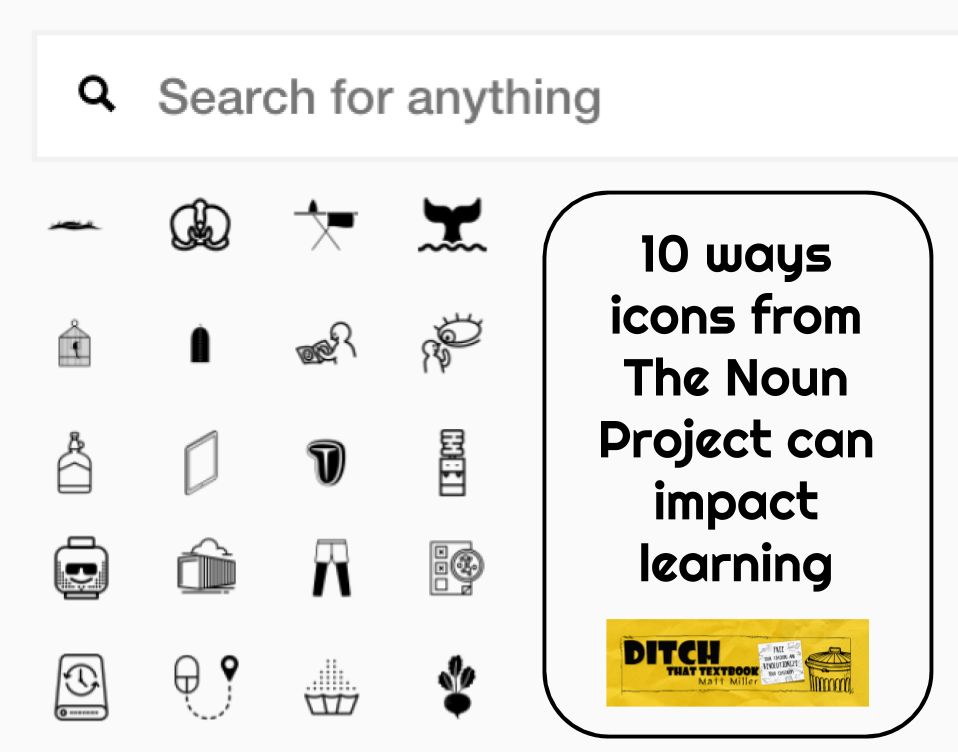 Icons can help students construct understanding and remember new ideas. The Noun Project has the hook-up. Here's how! (Icons via TheNounProject.com)

The majority of people think in pictures -- and some think exclusively in pictures.

At times, including photos, illustrations and other images can be considered silly and unnecessary in education -- almost as if adding them is like putting up decorations in learning.

Adding visuals to instruction and to products of learning can help learning stick long-term. And long-term learning is the least silly thing I can think of in education!

There are TONS of places to get great images to incorporate into learning. There are free image sites like Pixabay and Unsplash. You can use the Creative Commons search to find images, music, videos and more.

Photos can convey an idea, emotion, concept, etc. well. But if you want to communicate a simple idea quickly and efficiently, icons do the job.

And my favorite source for icons is The Noun Project (TheNounProject.com).

What is the Noun Project?

The site bills itself in this way: "Icons for everything. Over a million curated icons, created by a global community."

Just load up the site and you'll see a variety of what's available on thenounproject.com:

Artists from all over the world create these icons and add them to the Noun Project so others can use them in their work.

The icons are available to use in two different ways:

As educators, our favorite price is free, right? Download and use icons from The Noun Project in your work and include it somewhere in the work you're creating. Here are The Noun Project's requirements for attribution.

There's also educator pricing! If you want to use icons without attribution AND support the efforts of The Noun Project, you can get a NounPro account at half price. The educator discount makes it $19.99 per year.

How can I use icons in class?

There are loads of ways to include these visuals in your work. Here are some ideas:

1. Infographics with The Noun Project icons

This one is my favorite! I'm a HUGE fan of creating infographics out of icons from The Noun Project. In many ways, infographics beat the traditional essay or research report. They combine the information from the research with visuals that make the infographic easier and more fun to read. Imagine students creating something with their research that they'd want to share with their friends and family!

I wrote an entire blog post about creating infographics with Google Drawings. Icons from The Noun Project played prominently in that blog post.

Madeline Hunter Lesson Plan Template- This infographic was created to support the CUE BOLD conference. I wrote about the conference in this blog post. Skills of the future infographic- The Noun Project icons were a key part of Ditch That Homework, a book I co-authored with Alice Keeler. If you present with PowerPoint, Keynote or Google Slides, icons from The Noun Project are a natural complement. Text-heavy slides have been a common frustration of audiences -- student and teacher audiences included! -- for years. If you need to talk to a group, let your spoken words do the work and your slides amplify your message. Slides with images -- even a single image -- can have great impact.

Do you distribute handouts to your students? Study guides? Printed activities for them to complete? If your materials don't have any images at all, you may be missing out on a great instructional advantage. Use images (including icons) meaningfully to connect ideas in the brain more concretely.

Using badges to provide a bit of extra motivation for learners is hot in education right now. Video game platforms offer badges as incentive for playing. Apps include them. Snapchat and other social media use a form of them in "streaks" -- posting consecutively for a number of days. Looking to incorporate badging in your classroom? Icons from The Noun Project can be a great way to find those badges. You can add borders and other elements to an icon-based badge in Google Drawings. Use some of the same suggestions that Mandi Tolen makes in this post on creating custom Bitmojis.

Icons work great for storyboarding -- sketching out what a story will look like frame by frame. They can be used to create comic strips (or, when multiple comic strips are put together to lengthen the project, comic books!). Stories are better with images!

​ When the brain associates images and text together, it creates better links and memory is stronger. Standard flashcards with term on one side and definition on the other often only use text. Add images to flashcards to make them more effective.

Download icons from The Noun Project and create a cut-out sheet (arrange them on a Google Drawing so students can cut them out). Distribute to students and let them cut out the images. Students can use them to put objects in order, to group them, etc. This is a very tactile and visual activity that can lead to great learning!

Making flowcharts or instruction sheets can be improved with icons. Show students what to do -- or what not to do -- with a combination of icons and text.

Below is an example of a video I created with a few icons from The Noun Project included:

Lots of icons from The Noun Project can be added to student work (documents, slide presentations, etc.) as a form of visual feedback. Icons of popular emojis are available, which could be a fun way to show students that you loved their work (or if you didn't, how you really felt about it). Use a Google Drawing to pair an icon with a little text and save it as an image. Use it as a badge or a sticker! Here's a blog post and tutorial video by Stephanie Filardo on how to create them!

On the "Icons for Education" page, The Noun Project suggests other ways to use icons in the classroom. Go check them out!

Icon boards include an open space for students to organize what they’re learning visually, combining text and images. They include plenty of icons that students would likely use from sources like The Noun Project​. Whatever they’re called, Google Slides and Google Drawings + icons from The Noun Project were made for creating them.

Infographics are visually stimulating and force us to summarize well. What if we did more infographics in schools and less research papers?

You (and your students) can create infographics with Google Drawings + The Noun Project.

The Noun Project add-on gives you quick, easy access to 100 of its most commonly used icons. Plus, it lets you change the color of the icons — a premium, paid option on the website — for free! Any traditional activity can be put through the DOK/higher-order thinking process. Take an old, tired activity and put a deeper spin on it.

How to make an FAQ page for parents and students

6 ideas for infusing choice into the math classroom