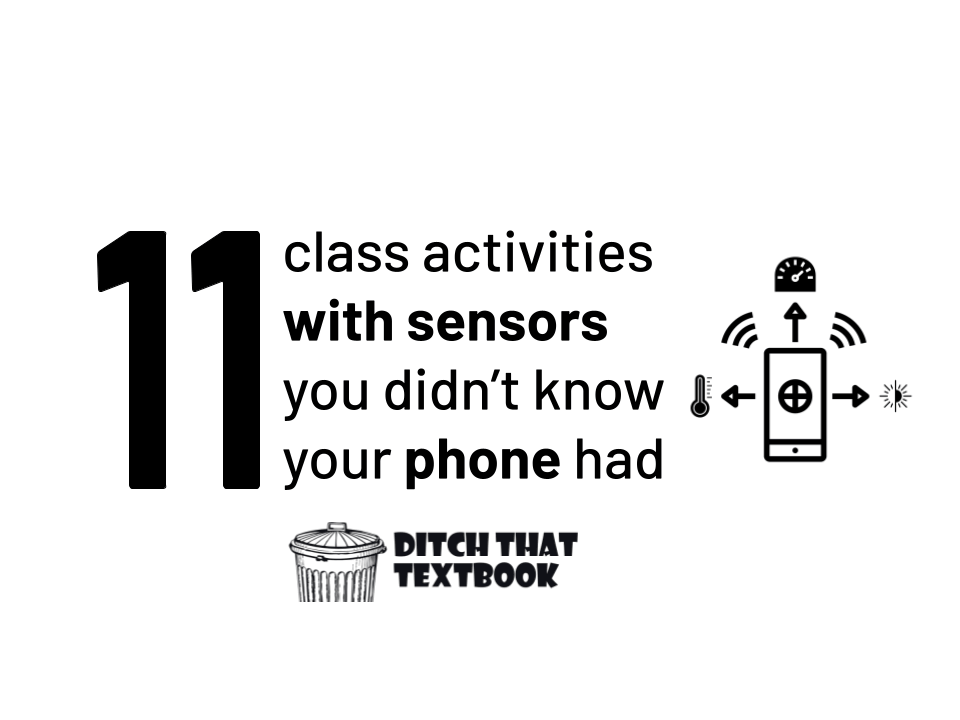 Mobile devices can do more than we imagine! Rebecca and Chrystian Vieyra developed apps for classrooms to tap into their sensors.

Smartphones and tablets are powerful devices that people use every day to make their lives easier.

They’re even smarter than we give them credit for. Most of them have sensors we never knew they had.

For example, many devices have:

Try to put a series of instruments together like that in your classroom and the price tag will make it next to impossible.

That’s where Rebecca Vieyra and her husband, Chrystian, come in. Rebecca, as a high school physics teacher, asked Chrystian to develop some free Android mobile apps that tap into these capabilities.

She saw potential while taking students to Six Flags, an amusement park, as a class field trip. She knew that many of her students had cell phones and could measure some significant data while on the roller coasters at the park if they had the right apps. Chrystian developed Physics Toolbox, a suite of apps that teachers (and others) could use to gather data from the world around them.

Rebecca, now on leave with NASA Aeronautics as an Albert Einstein Fellow, found many ways to incorporate those apps into the classroom and continues to do so. She and I met at the Google Teacher Academy in Austin, Texas (yes, she’s another one … I wrote about Joe Marquez’s use of cell phones and Twitter in class recently, too). We recently did a Google Hangout to talk about these apps (embedded below) and covered a lot of ground!

Here are some activities where Rebecca envisioned teachers using Physics Toolbox (remember, I’m a Spanish teacher and not a science or math teacher, so my explanation may not be perfect!):

1. Spin, spin, spin — To measure centripetal acceleration using the accelerometer app, students can hold their devices in front of them and spin around. They’ll be able to notice how faster and slower spinning affects the data they gather. Rebecca had a ballerina in class once that provided some great data with pirouettes!

2. Motion in three dimensions — Again, using the accelerometer app, students can measure 3D motion — forward/backward, side/side and up/down — by just shaking a device. Rebecca suggests having students jump with the devices to see how taking off, being in mid-air and landing affect the readings. Taking a “field trip” to an elevator puts a new spin on the same activity.

3. Changing leaves — Although Vieyra Software doesn’t have an app to do this yet, students could use the cameras on their devices to measure the change in leaf color on trees in the fall. Using an app that measures red/green/blue values in images, they could watch as the blue and green levels fall and the red levels rise as leaves change color. The changes could be correlated with average daily temperature, Rebecca said, and could be compared with data from students around the country or world.

5. Changing weather, changing pressure — When a warm or cold front blows through, the air pressure changes. Those changes can be measured using mobile devices using a barometer app.

6. Bright lights — Cell phones and tablets use light sensors to measure ambient light to adjust settings for digital photos. Those same sensors can be used to measure and compare light sources. Use camera flashes from cell phones, LED lights, flashlights or others and compare.

7. Can you hear me now? — A sound meter can do similar measurements with sound. “What we perceive as loud and soft isn’t necessarily the same thing as actual sound intensity,” Rebecca said. Some data can convince students that the “really loud sound” they just heard wasn’t so much different from other quieter ones. Use another cell phone or anything with a speaker to produce sounds to measure.

8. Google Cardboard — This new product developed by Google is almost like a set of inexpensive virtual reality goggles. It gives users an “immersive experience” by showing them images that can be seen through Google Cardboard. Cardboard is made of a cardboard box that holds a cell phone with lenses for looking in. The phone uses its built-in sensors to tell when the user turns to look around, and it simulates that movement in the image it displays. It also uses the phone’s magnetometer to create a button on the outside that users can use while their phone is encased in Cardboard (Rebecca explains this in better detail in the video!). Cardboard could be used to tour places around the world that are too expensive for students to visit.

9. Tick, tock — The proximeter in mobile devices can be used to measure the period of a pendulum. The device can sense when a pendulum passes in front and can help to mark the time.

10. How cold is it? — There are lots of options for measuring the ambient temperature and comparing it around your city, state, country or beyond.

11. Helicopter blades — A stroboscope is great for creating light effects at a dance party, but it can also help determine the lift of a toy helicopter (among other things). Rebecca has used the stroboscope app (which is currently being refined in beta testing) to sync the flash with the spinning frequency of the moving blades of the helicopter. That information, used in cooperation with an electronic balance, can determine the lift that the helicopter’s blades can generate. (Leave it to the teacher placed with NASA Aeronautics to figure that one out!)

Teachers can become uncomfortable with questions that don’t have a correct answer, Rebecca said. The measurements from these apps can uncover what she calls the “dirty, yucky part of science,” when they generate data that is unexpected. That’s real science, though, she said, and “the data might not always be pretty and the answer might not always be obvious.” Students and teachers can fiddle with that data and invest time into figuring out why it is the way it is.

This wasn’t the end of the conversation! Rebecca and I talked about a lot in our Google Hangout, including:

Rebecca has created a Google Plus community for sharing experiences and and ideas among educators. Anyone with questions, comments or ideas about Physics Toolbox can contact Rebecca via e-mail at rebecca.elizabeth.vieyra@gmail.com.

UPDATE (1/2/15) — Physics Toolbox isn’t available on iOS (iPhone, iPad, iPod). This list includes lots of apps that can do similar things. (Note: The Physics Toolbox apps for iOS are unrelated to the ones in this post and aren’t created by Vieyra Software. They’re problem solvers, not data collection apps.) Rebecca says SensorLog is the closest alternative to her Physics Toolbox (although it is driven by ads and has in-app paid upgrades, which Physics Toolbox does not).