Deposits and withdrawals at the Relationship Bank and Trust

Deposits and withdrawals at the Relationship Bank and Trust 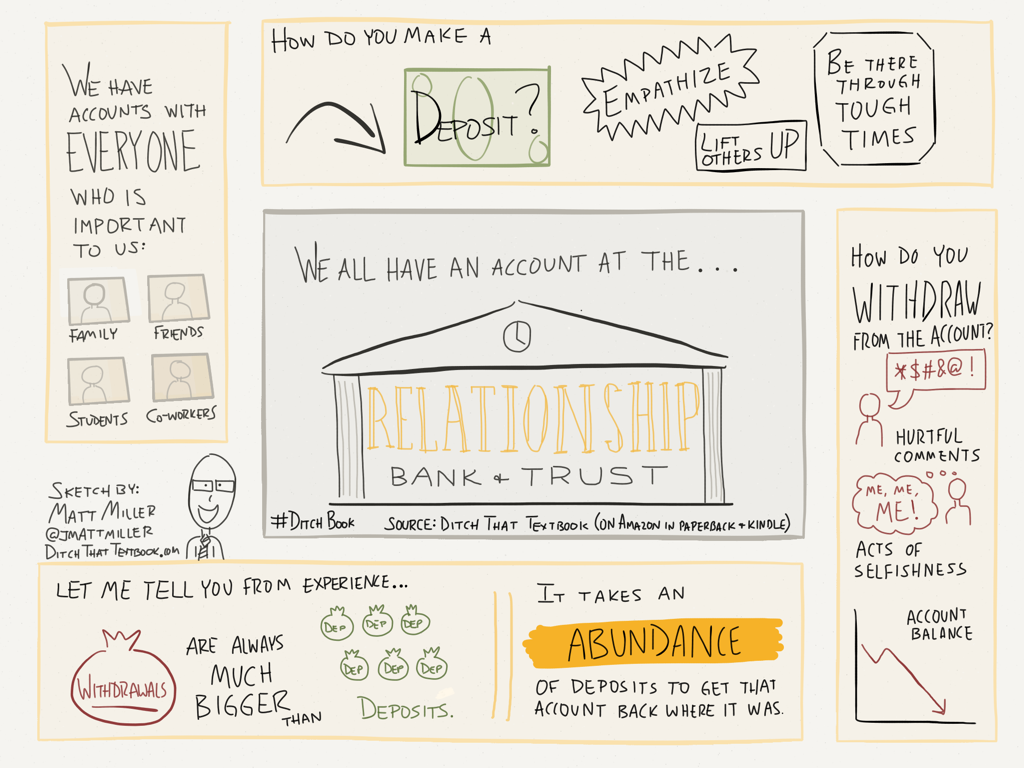 The capital of student/teacher relationships is interactions, and there are deposits AND withdrawals. (Sketch by Matt Miller)

On the first day of school every year, I open lots of new accounts at the Relationship Bank and Trust.

When a new student enters my classroom door, a new account is active. With some students I’ve seen in the halls or already know, their accounts already have a balance.

A simple smile and “hello” at the door puts a positive balance in the account. Making a comment about an activity that student’s in or a band or character on his/her t-shirt is like a double deposit.

It dawned on me: those relationships are like bank accounts. We make deposits when we do anything to show students we care about them. Negative interactions are like big withdrawals that drastically drop our account balances.

This is an idea I wrote about in my book, Ditch That Textbook, in a chapter titled, “Build Respect and Relationships.”

In my teaching career, I’ve had really high relationship balances. I’ve also had some negative balances where I’ve been very deep in the hole.

An example of a very rich relationship account: a student we’ll call Steven. I’ve learned about some of his interests (namely racing four wheelers and geckos) and we’ve talked at length about them. Deposit.

I recently helped him design an advertisement for class officer elections with a cool Google Slides template on Slides Carnival. Deposit.

The interest I get on the account? He tells me how much he enjoys my class and learns in it and how he wishes other teachers would teach like me. I think (or at least hope!) every teacher has a dream kid like this in their professional lives.

Not every relationship has had such a million-dollar balance.

An example of an account with a deep negative balance: a student we’ll call Leigh. Nothing I did in the classroom caught her interest and she often left less than engaged. Withdrawal.

I called her out for talking in class once and assigned her extra work. Then, to make matters worse, when she balked at it, I told her, “It’s not like cutting your arm off. Just do it.” In front of the whole class.

BIG withdrawal. She closed her account after that. I never got a real chance to connect with her again.

I’ve learned a lot about managing my relationship finances as a teacher. The biggest lesson is to made little deposits whenever possible:

Those are the lessons I’ve learned, and they’re probably obvious ones, but they’re not the only ways to make a deposit.

I have found that if you make regular deposits, you’ll be rich beyond your wildest dreams in the classroom.

[reminder]What are the ways you make deposits in your student relationship bank accounts? What suggestions do you have for avoiding withdrawals?[/reminder]

Hannah Tyreman, a wonderful member of my personal/professional learning network on Twitter, mentioned me in a blog post called the Twitterati Challenge. I was honored and humbled at her comments about my work and how it “strikes a chord” with her.

The mention also meant that it’s now my turn. Here are the rules from @teachertoolkit:

Here are my five nominations for the Twitterati Challenge:

If this Twitterati Challenge idea sounds like fun, copy down the rules and start tagging some people of your own. Who knows whose day, week or year you could make?