Sketchnoting 101, for those with little artistic talent

Sketchnoting 101, for those with little artistic talent

Sketchnotes can be simple or ornate, but they all do the same thing: collect ideas visually that are easier to remember. (Sketch by Matt Miller)

Sketchnoting — creating notes with visuals, sketches or doodles — can be powerful.

It’s powerful for the sketcher — visual notes capture ideas in ways that are more likely to stick in the brain by nature.

It’s powerful for the viewer — it presents ideas in an engaging way that can be understood almost instantly.

They’re great for educators that want to gather their ideas and remember them later (at meetings, at conferences or while watching something they want to remember). They’re also great for students, who take far more notes than any of their teachers!

Besides, sketching is fun!

After having done various forms of sketchnoting for almost a year now, I have some lessons and ideas I want to share with you. But beforehand, we have to take care of the elephant in the room. (And if you don’t want to deal with that elephant, you can find my list of lessons and ideas below it.)

The elephant in the room 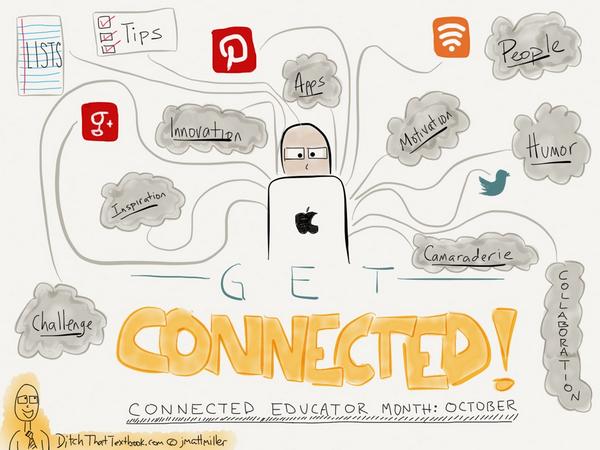 There’s an enormous barrier — think of a 10-foot stone wall with poison ivy growing on it! — separating eager would-be sketchers from the promised land of sketching glory.

That barrier is the “I can’t draw” mentality, or its equally repulsive cousin, the “I’m not an artist” mentality.

Related to that: I have a confession to make. The headline for this post, “Sketchnoting 101, for those with little artistic talent,” is a bit intentionally inaccurate. (Please forgive me. I hope this won’t erode the trust in our relationship.)

Here’s the truth: We all have artistic abilities. Look at all of the drawing we used to do as kids!

The only thing that’s missing is some practice. Artistic skills can be developed just like any other skill.

I’m awful at tennis. I can’t hit a laser-fast first serve or hit a killer top-spin backhand return shot. Why? Because I haven’t practiced tennis since I played on the middle school tennis team in sixth grade.

If I practiced those skills, would I ever look like Novak Djokovic or Rafael Nadal? Absolutely not. But after practicing, I would look much, much better than when I started not having picked up a racket for more than a decade.

Here’s the beauty about sketchnotes: You don’t need to be an artist to create effective sketchnotes. Using visuals to record ideas are better at producing memories that you can recall than just words. (More on that later.)

So, to sum up the slaying of that elephant in the room: just jump in and start sketching. The more you do it, the better you’ll get at it.

Have I convinced you to at least give this a try? I hope so. On to some ideas! 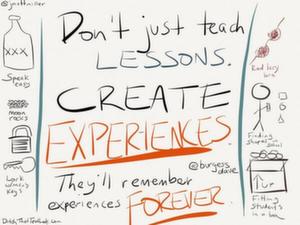 Use sketchnotes for what works best for you. Sometimes, I’ll just sketch a single quote to help it stick in my mind.

(Disclaimer: Much of what I’ve learned has come from other great sketchers, including but not limited to educators Brad Ovenell-Carter, Silvia Rosenthal Tolisano, Sylvia Duckworth and Amy Burvall as well as sketchnoter extraordinaire Mike Rohde. Mike wrote “The Sketchnote Handbook,” an excellent guide for getting started in sketching.)

Sketchnoting doesn’t have to be all about creating an ornate masterpiece of text and doodles. We’re not looking for museum-quality work … just something that makes ideas connect in the brain.

Which brings us to our first point …

1. Know your audience. Do you want to do those museum-quality sketchnotes mentioned above? That’s great … and there will be lots of people that will love looking at them. But most sketchnoters create visual notes just to help them remember things. If it feels out of sorts and all over the place, that’s OK. The visuals mixed with text are very brain-friendly for remembering. That’s because …

2. Visuals beat text for memory. There’s this idea called “visual superiority effect,” which suggests that concepts learned through pictures are more easily recalled than concepts learned through words alone. Want to create presentations that others will remember? Use visuals. Lots of them. (I’ve written that we’ve been getting this idea wrong in classrooms for ages.) So, if you’re convinced that sketchnotes are useful now, what should you do next?

3. Practice. A lot. My sketches are not of the caliber of great professional sketchers. However, I’m a lot better than I was when I first started tinkering with the Paper app by FiftyThree (my sketching tool of choice). I’ve done some pretty bad sketches (especially this ugly purple cow!), but I didn’t quit practicing … partly because I wanted to improve and partly because sketching has been really fun. One way you can improve sketches and make them easier is to …

4. Build a library of icons for ideas. The idea of home? A simple house (with a chimney, of course!). Love something? Use a heart. Time? A clock. Work? Maybe a briefcase. Some simple, easily-created icons that you can refer back to time and time again. For ideas, I’ve referred to Hand-Drawn Goods, a nice collection of sketched icons (many available for free to use in presentations and beyond!). Simple Google Image searches can yield ideas for visual representations of an idea or word, too. If you can’t find a pre-drawn idea to pattern yours from, you can always …

5. Use basic shapes to create visuals. Mike Rohde (did I mention him and his great book already?) writes, “Everything you want to draw can be created with these five elements”: circles, squares, triangles, lines and dots. If you’re not sure how to draw it, try thinking of it as a combination of these five elements. Anyone can draw circles, squares, triangles, lines and dots. Give it a try. Drawing visuals of inanimate objects often aren’t the hardest to do, though …

6. Drawing people can be simple, too. Start with stick figures. They’re easy to do and can get across the ideas you want. Then go to augmented stick figures — you know, ones with accessories (hats, canes, books, etc.). Then add some clothes (add pants and shirts to your figures, then shoes, etc.). Pretty soon, your basic stick figures will look pretty good! Before developing all of your skills, it might be a good idea to …

7. Find a medium you like. As I mentioned before, for me, it’s the Paper app by FiftyThree. I really think their app uncovered the latent artist in me I never knew existed. That app makes what I create look tons better than what I could do alone on paper. Some sketchers love to doodle on paper with pen and pencil (and some are very picky about the paper, pen and pencil they use!). Whatever you’re most comfortable with is where you should start.

And to finish that “where you should start” thing I just mentioned, why don’t you just start? Find an article, a quote, a list, a speech, something that inspires you. Then start summarizing in text and pictures. Blend them all together in a way that works for you.

You might find that these ideas that you sketch have an interesting side effect — being stuck in your brain!

[reminder]What makes you excited/interested/nervous about sketchnoting? If you’ve done some sketching, do you have any other suggestions? [/reminder]