The value of creating with your students

The value of creating with your students 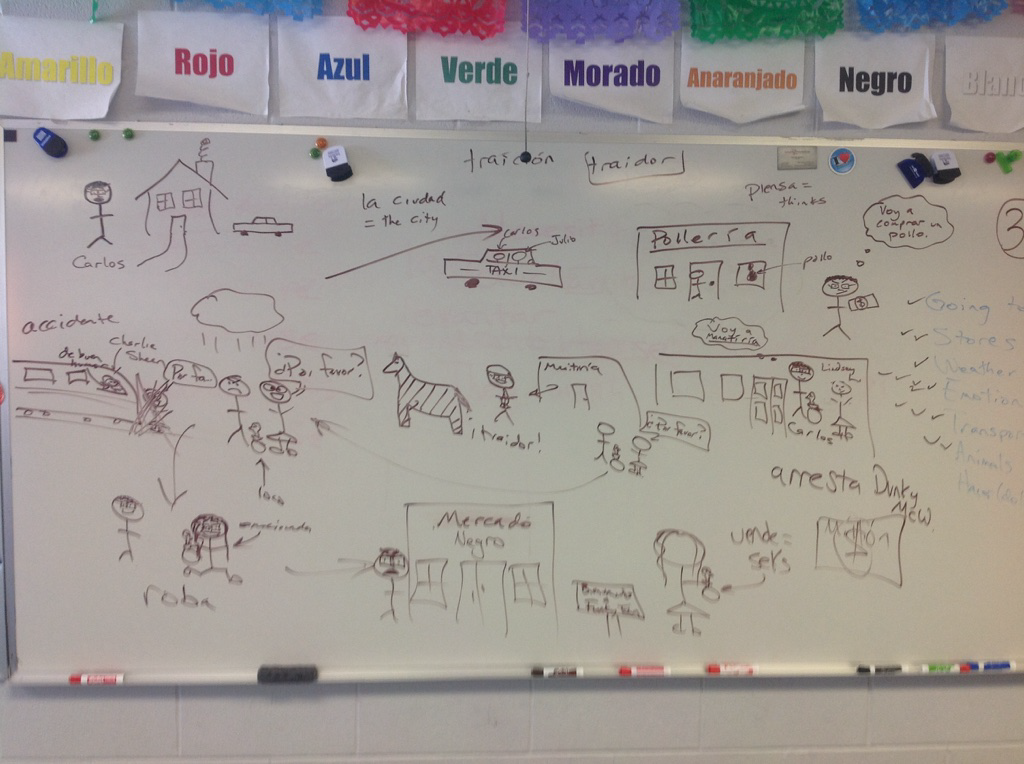 Even if it’s a sketch on the board, there’s power in creating with your students. Why? Because they’re creating something meaningful, and they’re doing it with you. (Photo by Matt Miller)

A couple weeks ago, a student of mine went into the city to buy a chicken. Let’s call him Carlos.

Carlos actually found a store that sold nothing but chickens. He bought the chicken and was happy with it … until he met Lindsay Lohan on the street, who persistently tried to buy the chicken from him.

Later, the chicken was stolen from Carlos by one of his classmates, who tried to sell it on the black market. The cops showed up and someone got arrested … but they got the wrong person! Carlos’s classmate escaped the whole ordeal.

(At what point did you realize that this story was made up? Was it the Lindsay Lohan part? The black market? Maybe the store with nothing but chickens?)

Storytelling is nothing new in foreign language classrooms. It’s a fun, lively way to get meaningful repetitions of new vocabulary or grammar structures if it’s done right. A couple weeks ago, one of my Spanish classes and I created this story together on the fly, and it was fun.

One of their favorite aspects of it all, though, is the illustration of the story. (See it in the photo above. Click on it for the full-sized image.) As I ask them questions to direct the story, I quickly sketch the story on the whiteboard. My sketches are not fancy, especially when I’m trying to do them fast.

Those sketches, however, are memorable. Once we’re done, my students often ask me to take a picture of it and put it on Twitter. On the best days, they ask to get their cell phones out and take a picture themselves.

(For the record, for every story that elicits a “Can I get my phone out to take a picture?”, there’s also an eyes-glazed-over, like-paint-drying story that flops on its face. It’s just the chance I take, but it’s also part of the excitement.)

Why is it a memorable experience? I’ve come to find that when my students and I work together to create something together, something magical usually results.

But not a lot of what they do at school would qualify as a “creation.” They’re not enthusiastic about sharing much of what they create there, unfortunately.

Think back to when you were a student and remember something memorable that you created. (If you can think of something, would you share it in the comments section when you’re done reading?) What do you remember about it? What lessons did you learn?

Creating with students is powerful (even magical, as I stated before) for two main reasons.

One reason: the word “create.” As a result of their work on their creation, something came to exist that didn’t exist before. So much of students’ scholarly efforts don’t yield anything that makes them proud.

The other reason: the word “with.” Students work by themselves a lot. They work with partners or small groups somewhat less. But they work together with the teacher to create something very rarely.

They also want to know that they’re important to their teachers.

If you ever worked with your parents to fix a car or plant a garden, how did it feel to accomplish something with them? To know that they had devoted all that time to making something important together with you? (For me, it was woodworking with my dad, even to this day.)

So many kids never get those opportunities with adults.

Sometime soon, instead of giving students an assignment, consider giving them an opportunity to make something with you. Include yourself in the process. Create something awesome that they’ll remember.

What in the world will you make? If you have no ideas, let them help you decide. (In fact, it might be better if they decide even if you do have good ideas!) It’s a risk to give up that control, but some risks are worth taking.

It might be an experience that changes their lives — or maybe makes them feel noticed, worthwhile and important.

[reminder]What’s a childhood memory you have of creating something with an adult? What impact did it have on you?[/reminder]